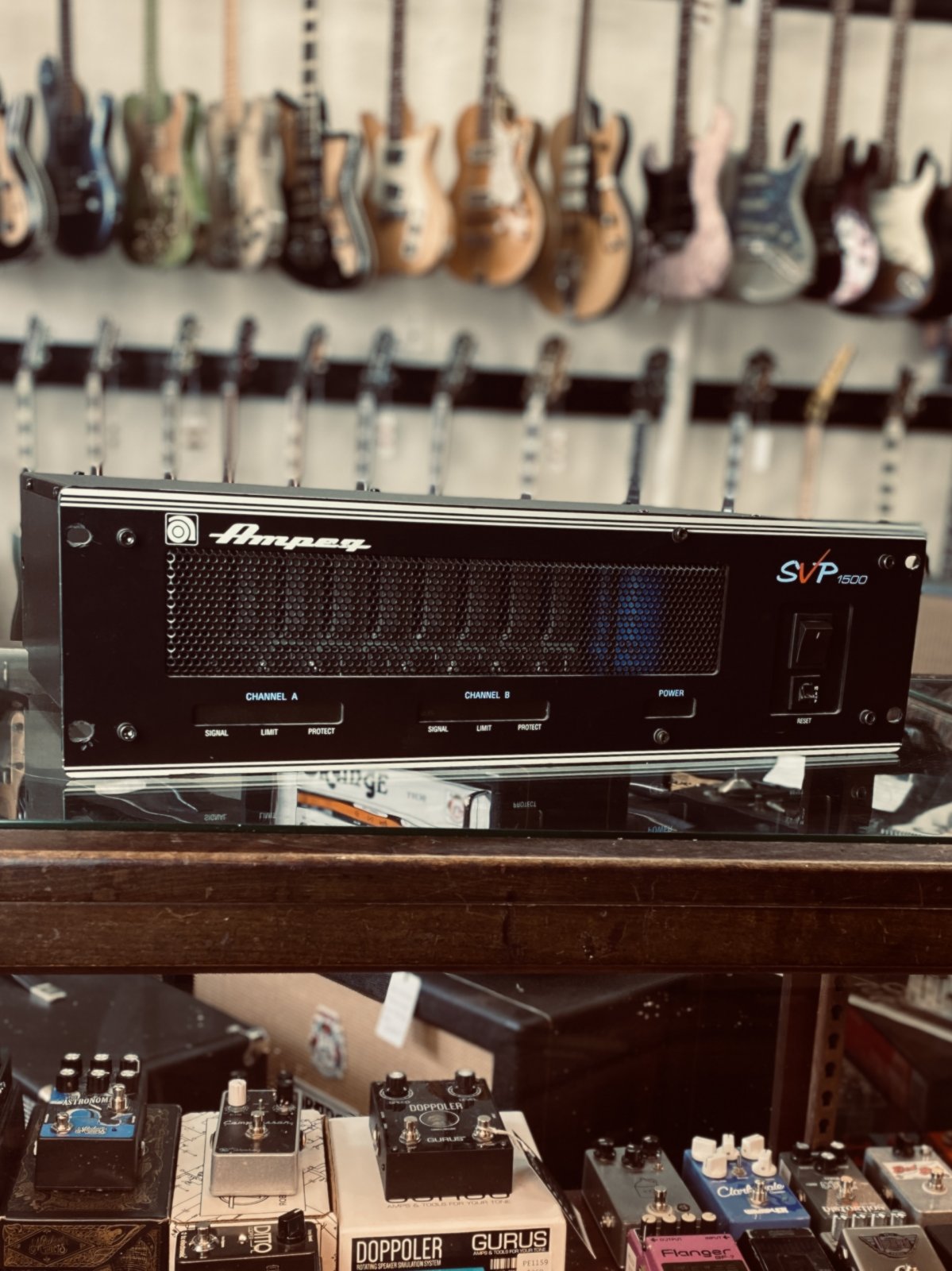 Excellent condition and in perfect working order. This rack mountable bass/power amp shows signs of use including a few scuffs here and there, but is overall very clean and functions without issue.

From Ampeg: In true Ampeg tradition, the SVP-1500 offers you more power, performance and ease of operation than any other bass amp in its class.
• RUGGED AND PORTABLE: Ampeg’s legendary reliability and three-rack-space design fit into most any audio reinforcement system.
• BALANCED INPUT JACKS: Balanced 1/4” phone jacks for use with high or low impedance signals.
• BUILT-IN LIMITING AND PROTECTION CIRCUITRY: Automatic protection against clipping, overload conditions, short circuits and overheating.
• DUAL OUTPUT JACKS: 1/4” phone and Speakon® jacks for connecting your speakers.

Stereo Mode:
The SVP-1500 can be used in the Stereo Mode as two separate amplifier units, each capable of driving loads down to 2 ohms. Each channel operates independently and has its own input connectors, sensitivity level controls, signal indicator LEDS, automatic limiter, fault protection circuitry, power amp, and speaker outputs. In the Stereo Mode, the Mono/Stereo switch (#14 on the rear panel) must be in the OUT position. Connections to your speakers can be made with either the 1/4” jacks* or the Channel A and B Speakon® jacks (or both since they are wired in parallel).

Bridged Mono Mode: The two power amplifiers can be bridged together to form a single, higher-powered amp. In the Bridged Mono Mode, the amplifier uses Channel A's input jacks and Sensitivity control; Channel B's are disconnected. Channel B's power amp receives its signal from a tap after Channel A's Sensitivity control, but prior to Channel B's Limiter, so each channel is independently protected. To select the Mono Mode, the Mono/Stereo switch (#14 on the rear panel) must be in the IN position. Because both channels are being used (bridged in series), the minimum speaker load impedance must be 4 ohms. Connections to your speakers must be made with the Mono Bridge (middle) Speakon® jack.

Biamp Mode: The SVP-1500 can be used to separately power the lows and highs of a cabinet with biamp inputs or a separate low and high frequency cabinet. For Biamp Operation, the Mono/Stereo switch (#14 on the rear panel) must be in the OUT (stereo) position. Connections to your speakers can be made with either the 1/4” jacks* of the Mono Bridge (middle) Speakon® jack. We suggest using Channel A for the low frequencies and Channel B for the highs. When using a single cabinet with a Speakon® Biamp Input jack, terminate the end of the speaker cable going to the cabinet with a single Speakon® connector. (Wire the connector according to the pinouts on the cabinet’s input jackplate label or in its owners manual). If the cabinet has 1/4” Biamp Low and Biamp High Input jacks, or when using separate cabinets for lows and highs, the end of the speaker cable going to the cabinet must be terminated with two 1/4” connectors – one for the highs, one for the lows. (A pigtail connector and/or other adapters may be used to split the low and high speaker wires going to the cabinets.)

Input Connectors: The SVP-1500 uses balanced 1/4" phone jacks as input connectors. These inputs accept High or Low impedance and balanced or unbalanced signals. A "stereo" 1/4" plug (ring/tip/sleeve) must be used to feed a high impedance balanced signal into the amplifier. In the Mono Mode, Channel A’s input jack is used; Channel B's input jack is disconnected. Speaker Output Connectors: Each channel of the SVP-1500 has both a 1/4" phone jack* and a Speakon® jack. A third Speakon® jack is provided for Mono Bridged use. The Speakon® jacks are more reliable for extended use at high power levels, and their use is always recommended over the 1/4” phone jacks. On each channel, the Channel A and B Speakon® jacks are wired in parallel with the 1/4" phone jacks: the tip of the 1/4" jack is connected to pin 1+ of the Speakon® jack and the sleeve is connected to pin 1–. Use of both the 1/4" jack and the Speakon® jacks simultaneously to connect two cabinets in parallel is possible, providing proper polarity is observed. The SVP-1500’s Mono Bridge (middle) Speakon® jack is wired as follows: Pins 1+ and 1– = Channel B+ and – respectively; pins 2+ and 2– = Channel A + and – respectively.